Pelvic congestion syndrome, also called pelvic venous congestion, falls under a broader range of pelvic venous disorders which are a known, but often unrecognized cause of chronic pelvic pain. Varicose pelvic veins develop when the valves in veins are not working correctly, or occasionally when critical deeper veins are obstructed, causing blood to pool and distend pelvic veins. 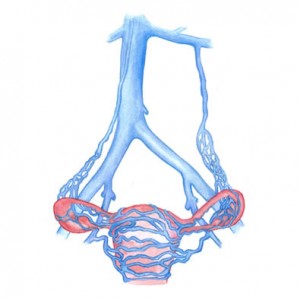 To explain pelvic congestion syndrome, it it helps to understand the purpose of veins in the body:

Occasionally, increased pressure inside pelvic veins may be the result of an obstruction in the major veins draining the pelvis.

It is estimated that 30% of patients with chronic pelvic pain of an unknown cause actually suffer from a symptomatic pelvic venous disorder. Although the causes of pelvic venous congestion are complex and poorly understood, a few commonly recognized associations include:

What are the symptoms of Pelvic Congestion Syndrome?

Typical symptoms of pelvic congestion include:

How Is Pelvic Venous Congestion diagnosed?

Because there are many other potential causes of chronic pelvic pain, medical professionals may conduct multiple exams and tests including:

What are the treatment options?

Once a patient is diagnosed with pelvic venous congestion, it can often be successfully treated with a minimally invasive procedure called embolization. Pelvic venous embolization requires little or no downtime and is performed in an outpatient setting. Occasionally, a compressed iliac vein may contribute to venous congestion and a stent may be indicated to help restore normal flow.

After treatment, patients are typically able to return to most routine activities the same day.

IVC® is accredited by ACR and IAC